Apple's smart folders and folder actions together brought some intelligence to macOS. Smart folders let you see the results of a query as if it were the contents of a folder and have those results automatically updated whenever files or folders change. Folder actions allow connecting scripts to folders that run whenever the contents of the folders change.

But as clever as those two options are, they don't combine to allow the kind of workflows that you may need for day-to-day work or to improve efficiency. Hazel fills that gap by pairing the observation of folder contents, including the special system Trash folder, with rules and actions.

Based on what it finds, it can notify you, delete files and folders, move them to other locations, rename them using a pattern, tag them and add comments, or import them as media into Music, Photos, or TV libraries. Rules can also produce notifications with optional audio alerts and upload files to several kinds of FTP and web servers. It can leverage Apple's smart folders by letting you monitor those virtual collections as well as static folders. No coding knowledge is required to use Hazel.

Hazel's rule-based folder watching lets you perform from simple to incredibly sophisticated actions as the result of files or folders being added or removed from a folder.

Hazel started as a preference pane in 2006. However, the version 5 release in late 2020 promoted it to full standalone app status while consolidating multiple views into a single unified interface. The update also lets you create a list or table in Hazel or import one, and use it to match against entries in a folder for renaming. Version 5.1 from late 2021 brought support for both Shortcuts in macOS 12 Monterey and AppleScript. The app also supports Automator workflows, JavaScript, and shell scripts.

Hazel can automate any task related to changes in a folder's contents. That can include letting you know when files are added or removed. The app ships with a few prefabricated rules attached to your home Downloads folder, a common catch-all location that helps demonstrate its utility.

To add rules, you start with an already added folder or smart folder or add one by clicking the Add Folder (single folder with a +) button in the toolbar. Hazel 5 added folder groups to help manage large numbers of watched folders: click the Folder Group button (two folders with a +). With a folder selected, you can manage existing rules or click the Create Rule button. Click the Status button to see which files and folders have had rules applied and when. A Pause/Play button lets you suspend and resume rules in a selected folder. Individual rules can be unchecked to disable them, too.

The rules are similar to Apple's approach to smart folders, photo albums, playlists, and other saved searches. You start by setting one or more conditions that define what you're looking for in that folder. For instance, you might search for all files and folders added more than four weeks ago. Clicking the + (plus) to the right of a condition lets you add additional ones.

With multiple conditions, you define whether you want matches to apply only when all conditions, any of them, or none are met. As with Spotlight searches, holding down Option reveals a … (ellipsis) button at the right of all conditions that, when clicked, adds nested all/any/none conditions for further refining. Rules that include Matches as a pop-up option let you use patterns. You could set up a pattern to find all photos that start with IMG, end with .jpg, and have a series of digits in between of any value.

Hazel allows token-, list-, and table-based file and folder renaming—something might immediately know you need if you recognize why it's useful. Selecting Rename in the actions area lets you select the attributes of a file. Hazel lists common ones; click Other to show other Spotlight-based metadata you can drop into the file name. 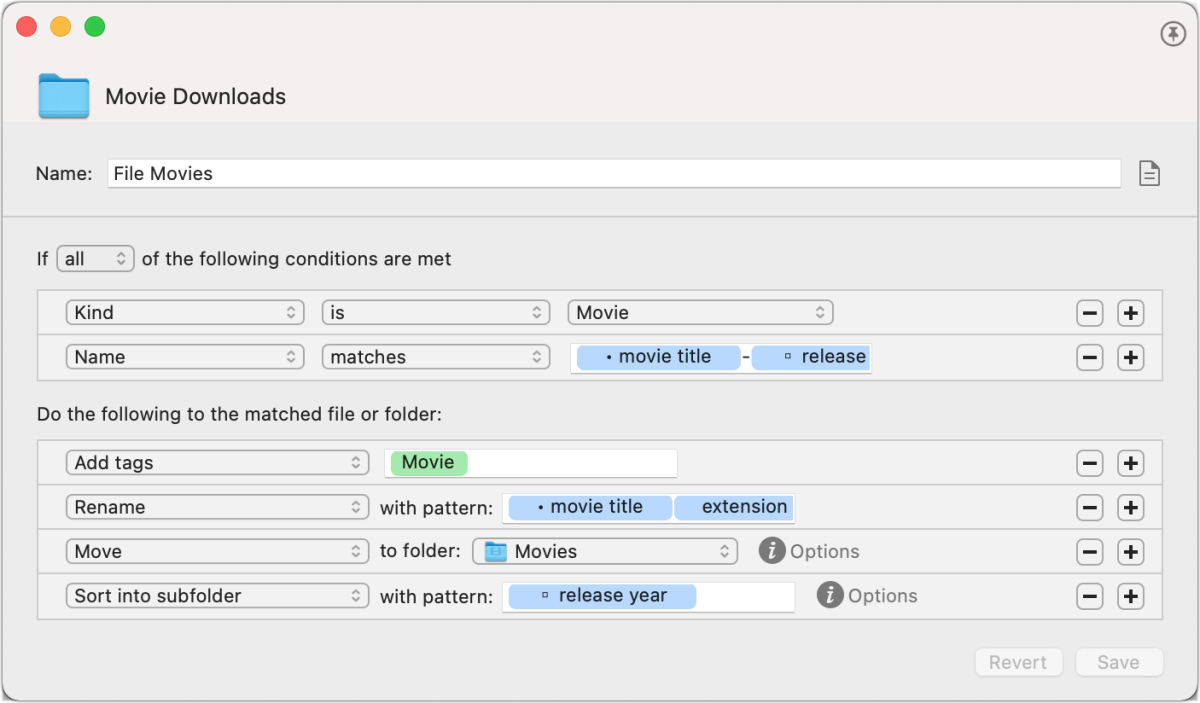 Hazel's rules can process a file: tag it, rename it, move, and sort it into a subfolder.

Matching options require a close study of Hazel's well-written and detailed manual, a big plus for an app that provides this much power to those who want it but which can be ignored by users who have more straightforward needs.

You can use Hazel for complicated series of actions. For example, you might want images meeting a certain pattern processing through an external script, uploaded to a web server, and imported into Photos. It can also give you negative knowledge: an alert when something expected doesn't happen. You might want to be sure that a backup completes every night or a file is updated by a certain time. If that doesn't occur, Hazel can alert you through a notification or a script that sends email or a text.

In addition to its rules and actions, Hazel also incorporates smart Trash and smart app delete features via Hazel Preferences Trash. You can choose to have Hazel automatically delete files in the Trash when they reach a certain age, a kind of selective Empty Trash, or remove files when the Trash exceeds a size you set. You can also turn on App Sweep, a feature similar to AppCleaner and other utilities that find support files, background software, and other items associated with an app. When you delete the app, it offers to remove all those files, as they're no longer needed. 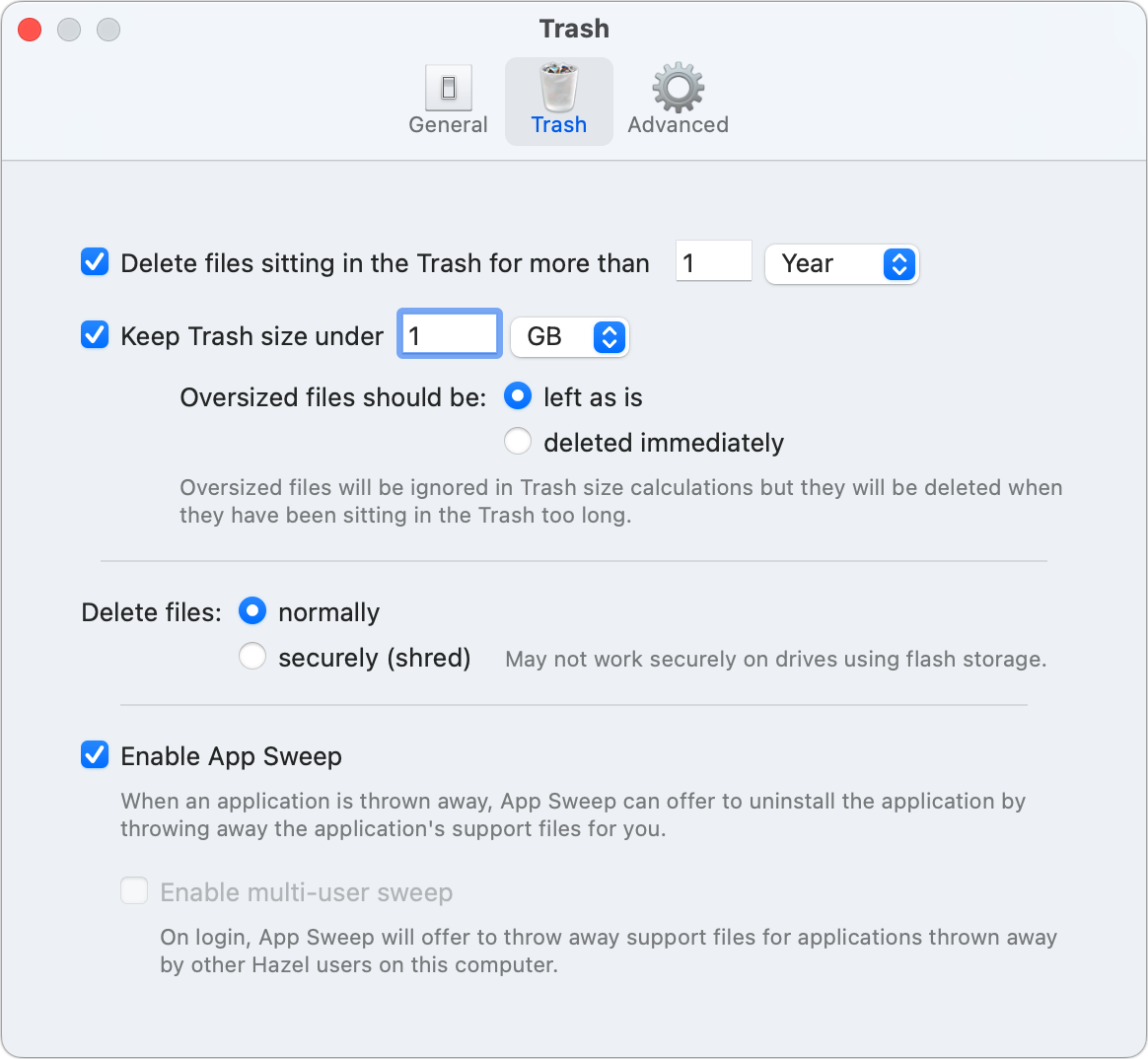 As a cherry on top, Hazel can monitor the Trash folder to keep its size under control, and remove all traces of an app when you delete it.

With a supercomputer at your fingertips, you should be able to tap its power for repetitive actions. Even as Apple increases hardware performance, the Finder's sophistication lags. Hazel lets you build behavior on top of Apple's foundation for better automation, sorting, and throughput, as it has for over 15 years.

We last reviewed Hazel in 2012 at its version 3 release. Reviewer Dan Miller wrote, …if you invest the up-front time Hazel sometimes demands, you'll get a neater, better organized drive with little to no further effort.

Identity fraud: One in four Australians fall for it, so what can be done?
More from Norton LifeLock