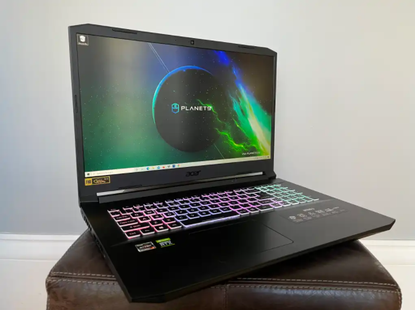 With the 15.6-inch Acer Nitro 5 model we reviewed earlier this year, Acer pushed its venerable Nitro 5 budget gaming laptop line into midrange gaming laptop territory by outfitting the $1,700 configuration with RTX 3070 graphics and a QHD panel. With this Nitro 5 (model AN517-41-R3NX), Acer further extends into the midrange category by bumping up the graphics to an RTX 3080 GPU and stretching the display to 17.3 inches — albeit with a lower, 1080p resolution. These upgrades push the price north of US$2,000.

The bulky, plastic chassis doesn't scream premium gaming laptop or even utter with much confidence midrange gaming laptop. If your goal is to buy the most power and the biggest display for your gaming dollars, then the 17.3-inch Nitro, which is powered by GeForce RTX 3080 graphics and AMD's stellar Ryzen 7 5800H CPU, is worthy of your attention.

Regardless of the configuration you chose, the Nitro 5 comes in a bulky, molded plastic enclosure. Such a design makes sense when the price is about a grand or less, but it's harder to justify when the price creeps above $2,000. Then again, 17-inch gaming laptops with RTX 3080 graphics typically cost a few hundred dollars more than the Nitro 5, which makes me feel a bit better about shelling out more than $2,000 for a plastic chassis. That said, the Nitro 5's chassis feels solid, with little flex and no creaking that can plague plastic designs.

While I wouldn't go so far as to call the Nitro 5 svelte, it does weigh less than other 17-inch gaming laptops we reviewed and weighed recently. Compared to the MSI GE76 Raider and the Gigabyte Aorus 17G, both of which weigh 6.6 pounds, the Nitro 5 weighs significantly less at 5.9 pounds. The 180-watt power brick adds 1.2 pounds to the total carrying weight while the 280-watt power bricks of the MSI and Gigabyte machines weigh a hefty 2.2 pounds each. 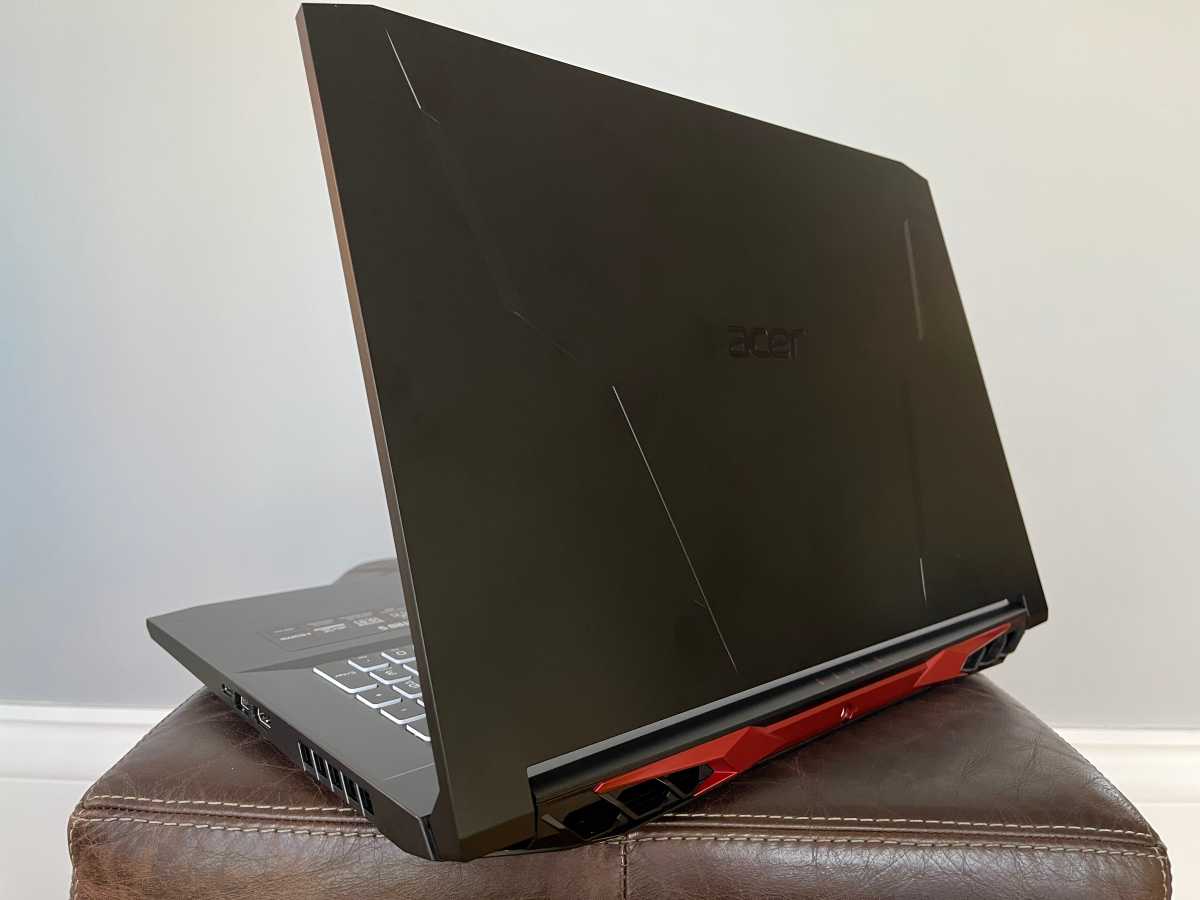 If you're familiar with the popular 15-inch Nitro 5, then you'll immediately recognize its 17-inch sibling. It follows the same blueprint design: a basic matte black body with some angular accents and red vent covers. The cheapest-looking part of the design are the thick, plastic display bezels. Thinning those out a bit and adding a glossy finish would improve the overall aesthetic. However, it's a budget gaming laptop at its heart. This configuration just happens to be packed with high-end components.

The keyboard is geared toward gamers. In addition to RGB backlighting, the arrow keys and the WASD keys are outlined with a white border. This helps guide gamers to the keys they'll use the most. As with most 17-inch laptops, the keyboard includes a dedicated number pad.With 15-inch laptops, the number pad's keys are narrower than the rest and the right Shift key gets trimmed down to accommodate the full-sized arrow keys.

There's enough room on either side of the keyboard to make the letter keys and the keys on the number pad bigger. It's a bummer that Acer didn't take advantage of the extra space and produce a roomier keyboard. The shortened right-Shift key may not have much of an impact when gaming, but I found it annoying for general Windows use. 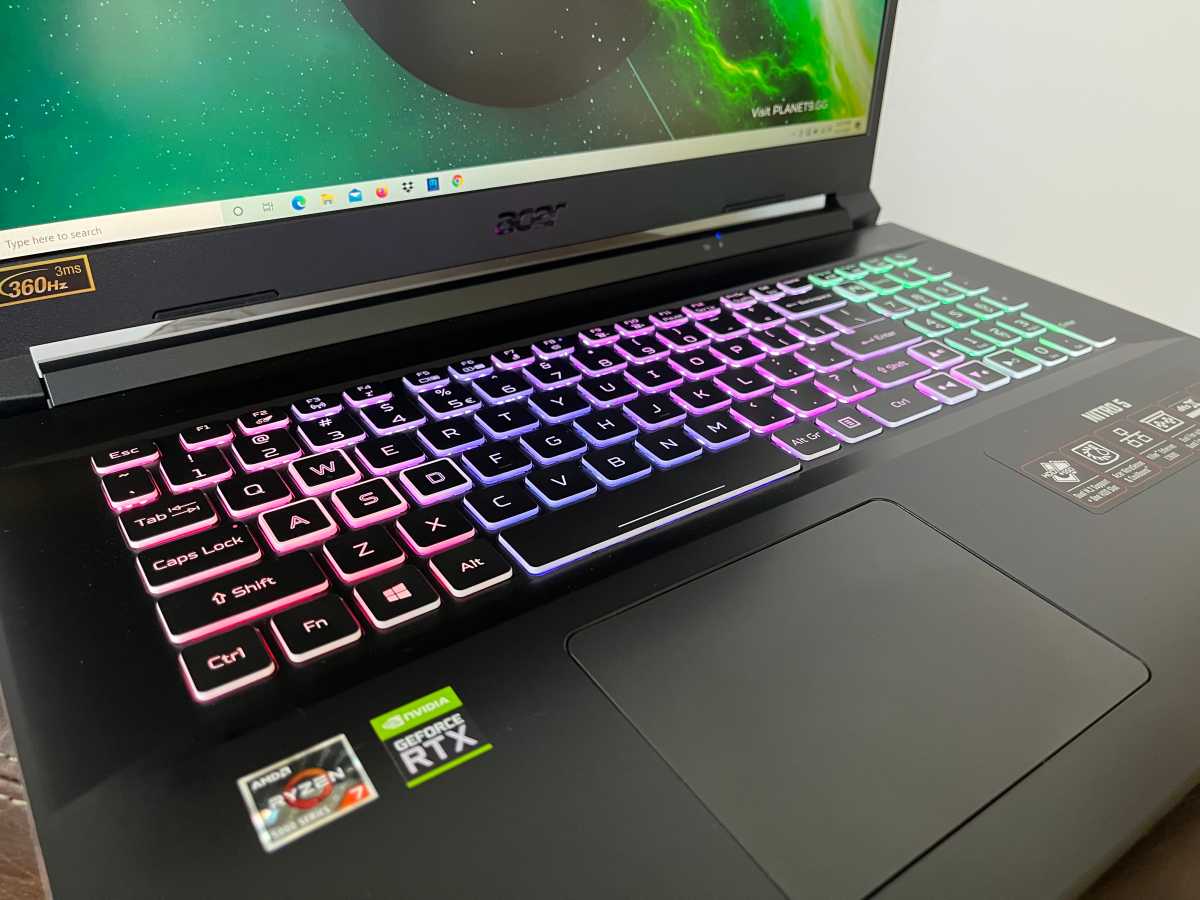 In addition to the WASD and arrow keys, there's one other key outlined in white. A special N key above the numpad launches Acer's NitroSense utility, which lets you adjust the laptop's power mode and cooling fan speed. You can also customize the RGB keyboard backlighting across four zones. 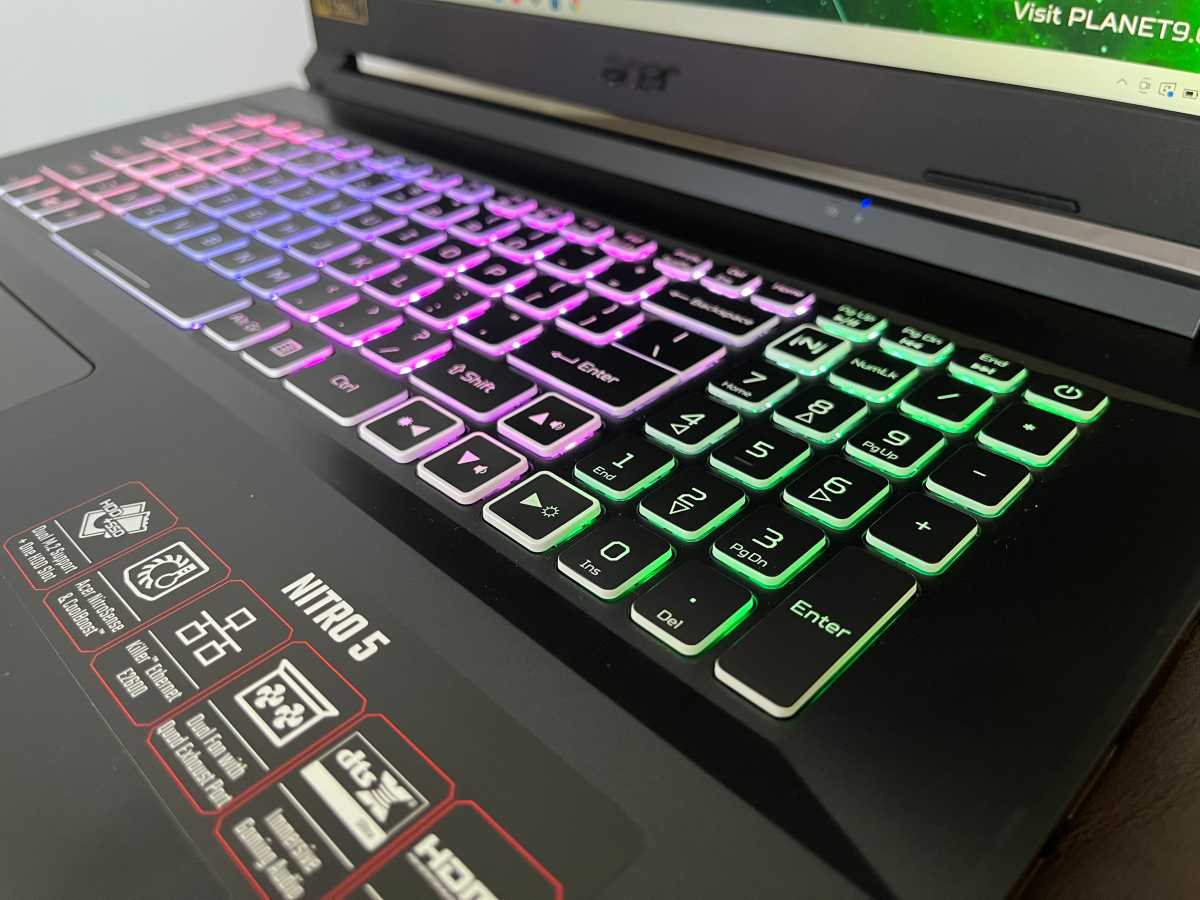 The touchpad looks undersized, given the large expanse that surrounds it on the huge keyboard deck. Its puny dimensions, however, is the only drawback. It felt accurate and the click offered the perfect amount of travel with snappy feedback.

The 17.3-inch display features a full HD (1920×1080) resolution, which is fine for some gaming and web browsing but the step-down model features a nicer QHD (2560×1440) display. Most gamers don't need anything above 1080p, but the higher resolution would make the Nitro 5 more capable for general use. For example, content creators might appreciate the finer resolution for photo and video editing.

The biggest drawback about the display is its lack of brightness. If you do most of your gaming in a darkened den, then you'll be okay. In sunnier environments, however, you'll have the brightness setting maxed out and still be looking for more. Offsetting the display's dimness is its wide viewing angle. If you move aways from the center position, the display's brightness doesn't diminish all that much.

Plainly stated, the 720p webcam is subpar. Even in near-ideal lighting conditions, the webcam produces a grainy image with oversaturated colors. It also lacks a privacy cover.

The speakers produce average laptop sound. Their sound can fill a small room, but there's little to no bass. YouTube videos and Zoom calls sound fine, but you'll want headphones for games and movies. 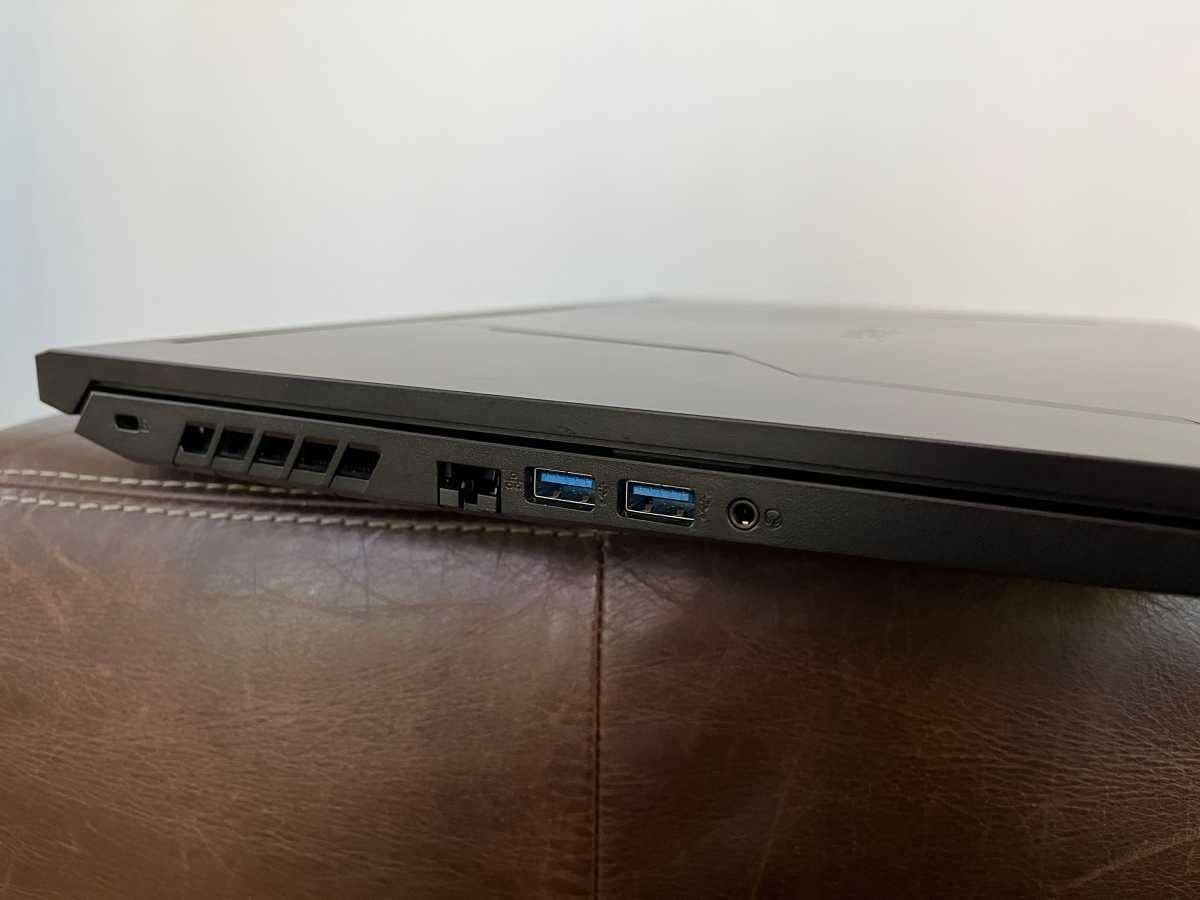 The port selection offers neither pleasant surprises nor glaring omissions. There's both USB Type A and Type C ports, which eliminates the need for a dongle. As with other AMD laptops, the USB-C port doesn't include Thunderbolt support.

You can store a large game library on the Nitro's 1TB M.2 SSD. If that's not enough capacity, there's room inside to add a 2.5-inch drive. Acer also includes the necessary cable and screws in the box to make such an addition easy. To increase the laptop's 16GB of RAM will require replacing the two 8GB sticks — there are only two DIMM slots.

Our Nitro 5 AN517 test system is based on AMD's octo-core Ryzen 7 5800H CPU and Nvidia's GeForce RTX 3080 GPU. Some versions of the RTX 3080 boast 16GB of VRAM, but this one is more of the common 8GB variety. To help keep thermals in check, the GPU has a lower Total Graphics Power (TGP) of 100 Watts. It will cede some performance to higher-wattage RTX 3080 GPUs; we've seen most in the 155-Watt range.

We compared the Nitro 5 against other gaming laptops such as the Asus ROG Zephyrus S17, the Asus ROG Strix G15 Advantage Edition, the MSI GS66, and the Dell XPS 17 9710. We also included the 15-inch Acer Nitro 5 AN515. All the CPUs – from both AMD and Intel–f eature eight physical cores and 16 processing threads.

To determine how well a laptop handles crushing CPU loads over a lengthy period of time, we used HandBrake, the free video encoding utility. When we transcoded a 30GB MKV file to a format suitable for Android tablets, the Nitro 5 topped the Core i7-based Dell XPS 17 9710 but finished behind a few other systems. This is a murderer's row of graphics powerhouses, however. All proved of them encoded videos with relatively speedy times. 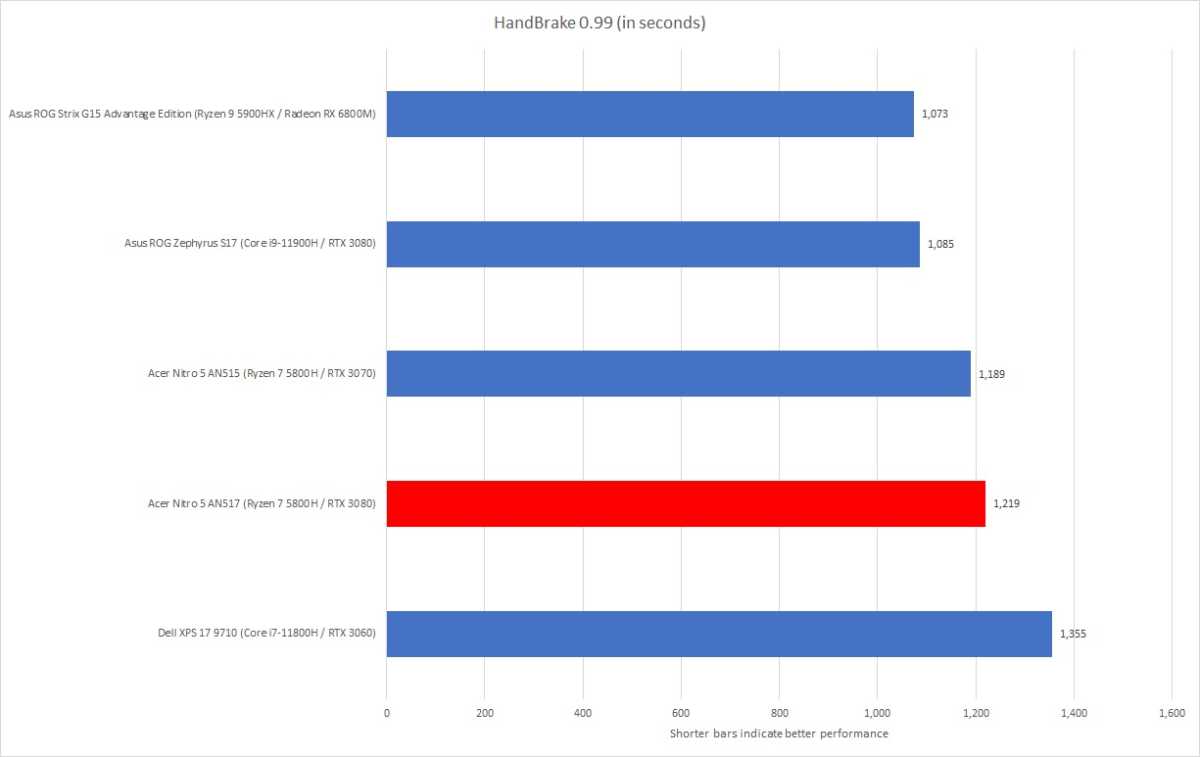 Next up is Cinebench, another CPU-intensive test but one that renders a complex 2D scene over a short period of time. The Nitro 5 again finished fourth, beating only its 15-inch sibling. With a score north of 2,000 on the multithreaded test, however, the Nitro 5 is more than capable of handling heavy photo editing tasks. The single-threaded scores of all the laptops here were excellent with the exception of the MSI GS66 Stealth, which was well behind the Nitro 5. 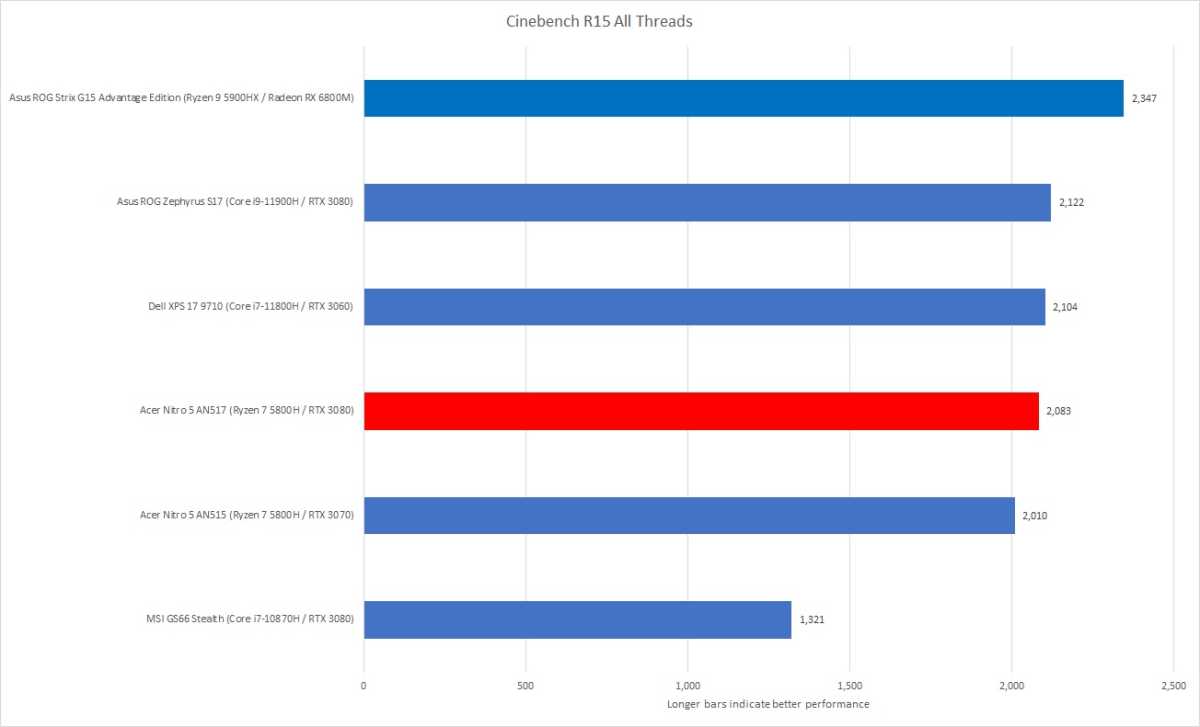 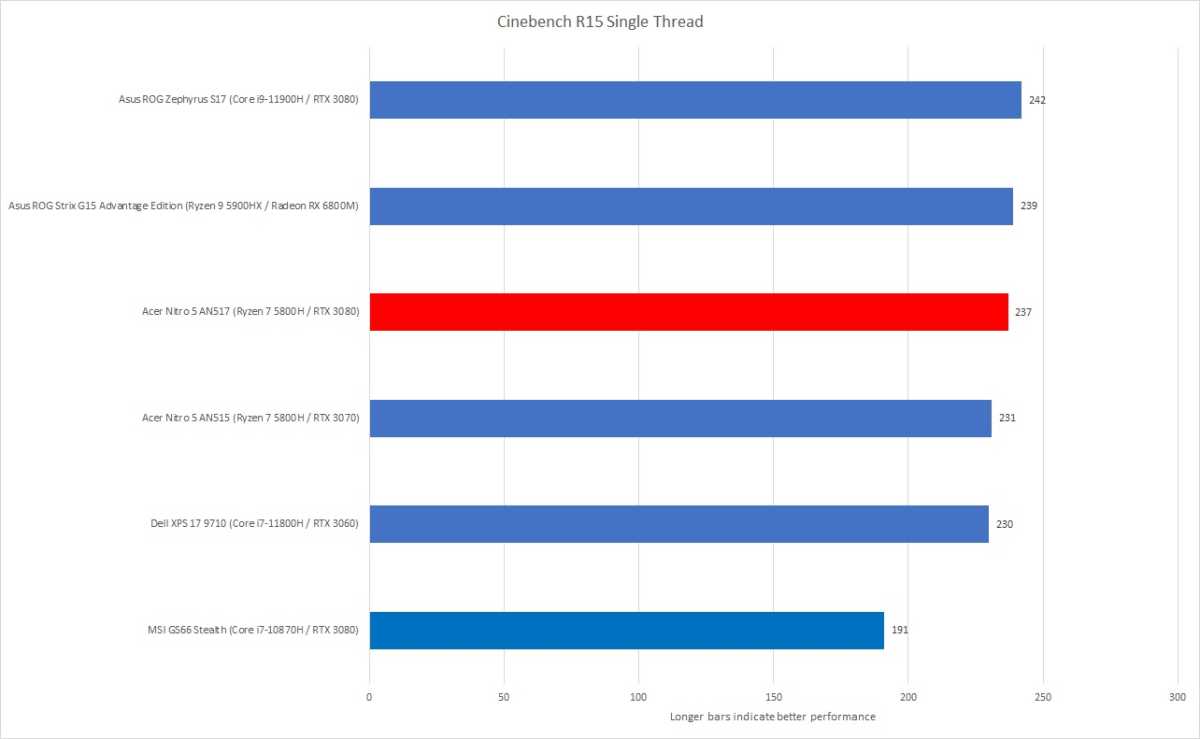 The Nitro 5 did a respectable job in terms of graphics performance. When we ran Time Spy 1.2 on 3DMark (these cinematic clips are designed to push the GPU to its limits), the Radeon RX 6800M-based Asus ROG Strix G15 and the RTX 3080-based Asus ROG Zephyrus S17 reached a score of 10,000. With a score of 9,679, the Nitro 5 wasn't far behind. That's impressive, as those laptops have the CPU advantage of using either a Ryzen 9 or Core i9 processor. 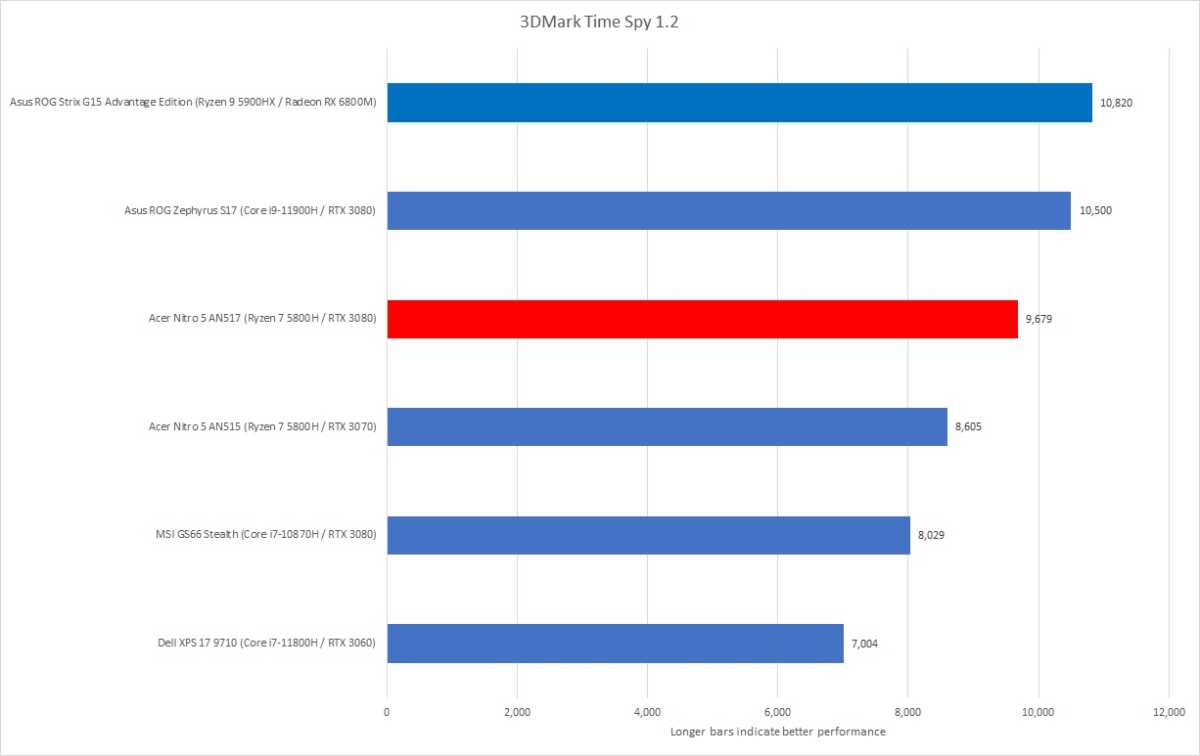 For real-world game testing, we played both Shadow of the Tomb Raider at 1920×1080 resolution at the highest quality graphics preset and Metro Exodus at 1920×1080 at the extreme quality graphics preset. When playing Shadow of the Tomb Raider, the Nitro 5 turned in a very playable 97 fps. As for the more demanding Metro Exodus, it averaged only 42 fps, which means you'll need to dial back the graphics quality settings for smoother gameplay. 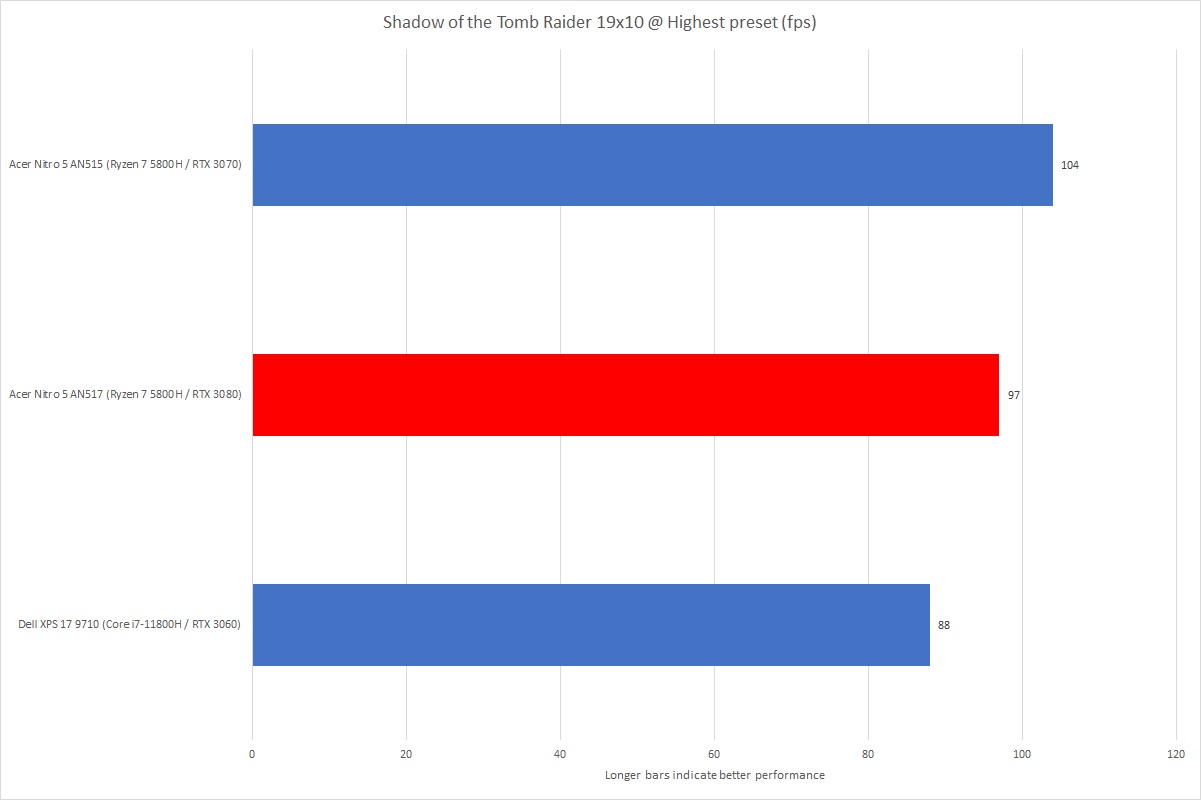 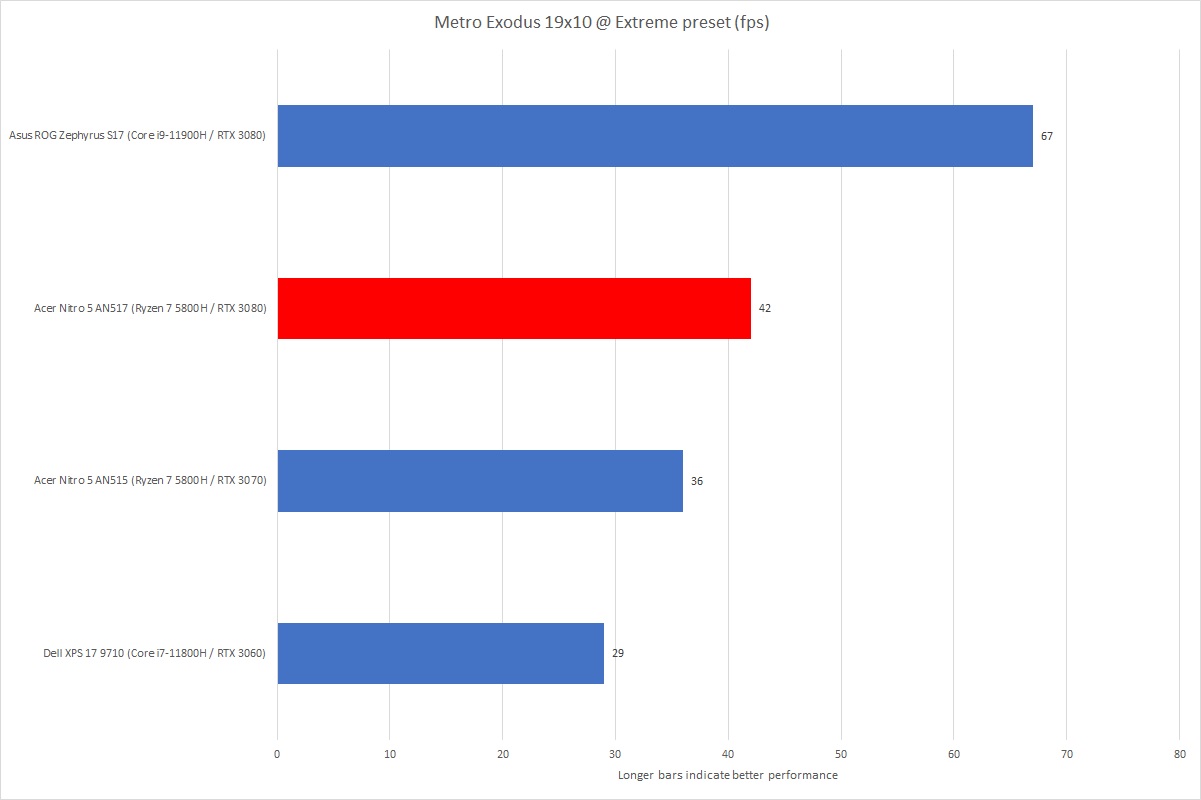 The Nitro 5 lasted nearly six hours on our battery-drain test, which is about average for a gaming laptop. We test the battery by looping a 4K video using the stock Windows Movies TV app with screen brightness set to 250 nits and the volume dialed to 50 percent with headphones plugged in. However, battery life is less important on a huge gaming laptop, which will spend most of its time tethered to a wall outlet. 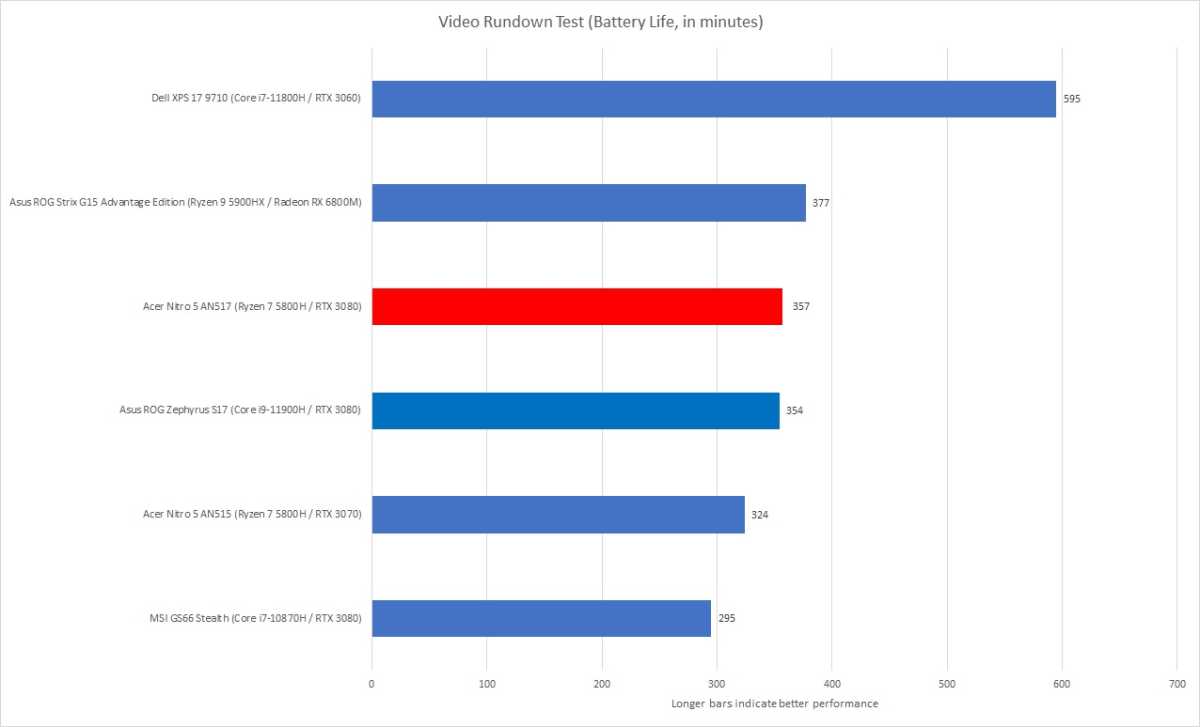 If you're looking for the most bang for your gaming buck, the 17-inch Acer Nitro 5 is a good buy. Getting RTX 3080 graphics along with AMD's excellent Ryzen 7 5800H and a roomy 1TB SSD for US$2,100 is a fantastic deal, as most laptops with the same graphics are priced closer to US$3,000. However, if you expect a premium priced laptop should have a sleek aluminum chassis and a bright display where colors pop, then you'll be less enamored by the Nitro 5.