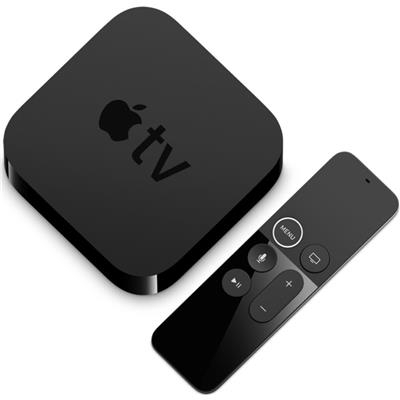 Offering a crisp slice of Ultra HD goodness and extra grunt under the bonnet, the Apple TV 4K is a worthy upgrade.

Now that Apple is finally ready to play the Ultra HD game, it's taking movie night to the next level with the Apple TV 4K.

Apple's little media player went through a major overhaul back in 2015 when the 4th generation Apple TV finally offered access to the App store, letting you install a wide range of third-party streaming services, games and other apps.

At the time there was some frustration that Apple didn't make the leap from Full HD to Ultra HD resolution, considering that streaming services like Netflix already offered Ultra HD content, but Apple decided to bide its time. Since then we've seen a range of Ultra HD-capable streaming players arrive in Australia, from the Chromecast Ultra and Fetch TV Mighty to games consoles – with the Amazon Fire TV 4K likely not far away.

Rather than rushing in, Cupertino has spent the last few years striking deals with the major movie studios to sell and rent Ultra HD movies in the iTunes store at Full HD prices – giving Apple a key advantage over rival online movie stores. Any movie already purchased from Apple in HD will be upgraded to Ultra HD for free if it's available in the store.

With these content deals in place, Apple is finally ready to unleash its 4K streaming box.

The entry-level $249 player contains 32GB of onboard storage, which is plenty for people who intend to primarily use the box as a streaming media player. If you're looking to download lots of apps, especially large games, then you might benefit from stepping up to the $279 64GB model.

On the outside the Apple TV 4K is identical to its predecessor, small enough to tuck away alongside a television, but under the bonnet it's undergone a major overhaul. It packs an A10X Fusion chip to cope with the added demands of Ultra HD resolution and High Dynamic Range.

Along with Gigabit Ethernet networking, there's also support for simultaneous dual-band Wi-Fi so the box can stream video via both the 2.4 and 5 GHz bands at once to help improve Ultra HD streaming performance.

If you don't have an Ultra HD television, or you lack the broadband speeds to make Ultra HD streaming practical, you'll still notice that the new Apple TV's menus are more responsive and apps load more quickly. The performance boost shines through when playing demanding games, with support for Metal 2 graphics delivering a 4x leap in graphics performance. Over time more games will take full advantage of this.

Apple has also given the tiny remote control an overhaul, adding a three-axis gyro for better motion tracking. The Menu button now has a slightly raised white ring around it, make it easier to tell when you're accidentally holding the remote backwards in the dark.

Of course the main attraction here is Ultra HD resolution, at 50Hz or 60Hz, letting you make the most of the latest Ultra HD televisions. You can also take advantage of High Dynamic Range content, offering more vivid colours along with extra detail in the very brightest and darkest parts of the picture. The player supports both standard HDR10 and the advanced Dolby Vision which optimises the picture for each scene in a movie.

You'll find around 60 Ultra HD titles available to buy or rent on the iTunes store, around half of which are in Dolby Vision. Netflix also supports Ultra HD and Dolby Vision, mostly on Netflix Originals content like Stranger Things 2. Australia's Stan offers Ultra HD on the Apple TV today, with HDR on the way.

Amazon Prime Video might also bring Ultra HD and Dolby Vision, as it's reportedly coming to the Apple TV. Meanwhile Australians are still waiting for Dolby Vision to come to a new generation of Ultra HD Blu-ray players and discs.

To take advantage of all this you obviously need a compatible television. HDR10 support is becoming common amongst Ultra HD televisions but Dolby Vision is still rare. LG is Dolby Vision's major backer so we put the Apple TV 4K to the test using LG's 65-inch C7 Ultra HD OLED television.

You'll also need a decent high-speed HDMI cable, which the Apple TV will test to ensure that it's up to the job. Thankfully Dolby Vision is backwards compatible, so you can still watch those movies on a HDR10 or normal SDR television.

When it comes to audio, the Apple TV 4K handles Dolby Digital Plus 7.1 soundtracks but not Dolby Atmos which adds a sense of height to soundtracks. To be fair Dolby Digital Plus 7.1 is no slouch, although there are reports Dolby Atmos might come to the Apple TV 4K via a firmware update. For now if your lounge room is Dolby Atmos-capable then you'll still need a disc player to make the most of it.

Read more Apple HomePod review: Packs a punch but shirks on the smarts

To watch Ultra HD in all its glory from Netflix you need download speeds of at least 15 Mbps, along with the top tier Netflix subscription, or else it dials down the picture quality. We put the Apple TV 4K to the test on 100 Mbps Telstra HFC cable, but thankfully the iTunes movie store is a little more forgiving than Netflix for those of us who aren't blessed with super-fast broadband.

When you press play on an iTunes movie, it starts playing immediately regardless of your broadband speeds thanks to the "Quick Start" option enabled by default in the menus. Like Netflix, this dials down the quality to deliver the best possible picture over your broadband connection.

Unlike Netflix, it's possible to disable Quick Start so that when you press play on an iTunes movie it starts to download the movie in the background at full resolution, storing it in a buffer. This ensures you get the best picture quality even on a sub-15 Mbps connection.

The trade-off with Quick Start disabled is that you can't start watching until there's enough in the buffer that the movie won't freeze before you reach the end.

You might be waiting for seconds, minutes or hours before the movie starts, depending on your download speeds, so on slow connections it might be best to strike a compromise and change the default picture quality settings under the  "iTunes Movies and TV Shows" menu.

Apple's Ultra HD movies stack up well against Netflix, but what's even more impressive is that they're on par with Ultra HD Blu-ray movie discs. Streaming services tend to skimp on the video bit rate, leading to blocky pixelation in the shadows, but the combination of Apple's hardware and the latest video codecs have all-but closed this gap. Only the fussiest of viewers will find the slightest traces of this pixelation, but nothing worth complaining about.

Unfortunately a question mark hangs over Apple TV 4K's Dolby Vision performance. Watching Wonder Woman in Dolby Vision from the iTunes store looks no better than watching it in standard HDR10 from an Ultra HD Blu-ray disc – even when you scour the brightest and darkest scenes in search of improvements.

It's difficult to pass final judgement until Dolby Vision players and discs officially hit the shelves, but Pan in Dolby Vision from the iTunes store fell short of the Pan Dolby Vision test clips we've seen from Dolby on the same LG television.

Dolby Vision concerns aside, the new Apple TV 4K can squeeze the most out of the latest televisions. Google and Amazon offer 4K rivals, but if your lounge room is blessed with a Ultra HD screen and is wedded to the Apple ecosystem then this is the streaming box for you.