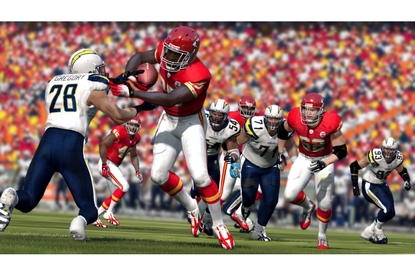 Madden NFL 12 is one for NFL fans only. That said, NFL fans will love this.

Even less so than Ice Hockey, Gridiron is not an Australian sport. The fact that Madden games continue to release over here baffles me, since it would be like a cricket game selling well in the US.

But here’s Madden NFL 12, and like NHL 12 it might not be a popular sport over here but it plays well, and unlike cricket games the big American audience means a big development budget, and big production values.

Those production values means this is a seriously good looking game. Characters models are chunky and animated very cleanly — to the point where if you squint you could almost be looking at a real game. The visual splendour is especially evident in wet weather, which looks spectacular.

Getting into the game though, and it’s somewhat less of an impressive package. Where NHL games have been giving players more and more control over what’s going on, and FIFA games have become better at representing some of the amazing individual skills soccer allows players to develop, Gridiron has more-or-less hit a wall.

To explain: Gridiron is a more intelligent sport than most people realise. Historically, sports have been a kind of training for war through abstract recreation of battlefield situations and tactics. Gridiron is a closer approximation than most, with clever use of plays being the most critical component for success.

In other words, Madden is a thinking game, and less of a doing game. For people looking for a more active experience, I’d suggest one of the recent Rugby Union games; thanks to the World Cup, there’s been some effort put into those this year. The other problem with Madden is that it’s largely an American sport, so that international layer of competition is not there. Unless you happen to follow the NFL, the real player names mean nothing, and team statistics look like arbitrary numbers.

There’s plenty to do in the game, with more gameplay options than you could hope to experience in full before Madden 13 next year, as well as some robust online play, but ultimately Madden is probably not a game that belongs in Australia. It’s well made for the niche of people here that do enjoy the sport, but where Ice Hockey is dynamic enough to excite regardless of whether you play or watch the sport in real life, Madden is too static and abstract for anyone but fans.

That said, it’s good to see EA continue to service the niches with its sports titles. Now if they could just get around to making a cricket game with the same attention to detail…