This tempered glass screen protector is a second skin for an iPhone, HTC One or GS4 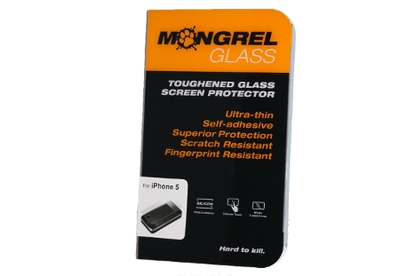 This Australian screen protector might be the best purchase you make for your iPhone 5 or Galaxy S4. It’s not perfect, but it’s the best solution we’ve found to protecting your phone’s screen against everyday knocks and scratches.

Mongrel Glass is a product from Australian tough-phone maker Mongrel Phones. Its main device is the ruggedised Android ‘Black Ops’ handset, but it’s meant for serious use by tradies, farmers, miners and so on.

Mongrel Glass is for any iPhone 5, HTC One or Galaxy S4 owner, adding a thick sheet of tempered glass — we’re talking Gorilla Glass toughness — to protect the expensive front screen of your smartphone from any untoward damage.

The retail package for Mongrel Glass is an orange-and-black plastic booklet, padded to protect its contents. And there’s a lot inside each packet — if you’re the kind of person who’s had trouble applying a screen protector before, Mongrel has you covered (so to speak).

Each Mongrel Glass protector, one per retail package, comes with a microfibre cleaning cloth, a wet alcohol cleaning wipe, a dry cleaning wipe, a pair of dust removal stickers, and finally an insert to boost the height of your iPhone, One or S4’s home button. There’s enough here to clean your phone’s screen to within an inch of its life, and unless it’s already scratched you won’t be seeing any dust or fingerprints or debris underneath the Mongrel Glass.

With all the cleaning hardware that comes with the Mongrel Glass kit, we had no problem making sure the screen of our Galaxy S4 was spotless before applying the screen protector itself.

Apart from its tempered glass construction, what makes Mongrel Glass an impressive product is one little thoughtful inclusion. Where any screen protector you buy from your local phone kiosk will have a two-part film on it — remove one side, place the screen protector, then remove the other side — every Mongrel Glass protector has a third piece. There’s a positioning sticker that when uncovered, lets you attach the Glass to your phone while it’s still entirely covered by film, letting you position it perfectly both vertically and horizontally before making the commitment of sticking it.

Positioning, uncovering, placing and smoothing out the Mongrel Glass is easier than any other screen protector we’ve used. Because it’s so sturdy and rigid, you don’t get any large bubbles collecting under the glass as you’re placing it, and the amount of extras included means that there won’t be any stray dust unless you’re trying to apply it in a sandstorm. That positioning sticker is a brilliant idea, and it means you don’t need to peel off, try to re-apply, and then throw away a fingerprint-covered protector before trying again (as we’ve done several times in the past).

The protector itself looks excellent. Being optical-grade glass, it’s just as clear as the front screen of your phone, and doesn’t significantly impact colour or the level of detail you can see. The Mongrel Glass protector is quite thick, though, so you will feel it when you’re using it, but on the S4 particularly it does feel natural and impressively strong.

Mongrel Phones strongly recommends buyers use a ‘bumper’ case with their iPhone 5, HTC One or Galaxy S4 when the Mongrel Glass protector is applied. Its reasoning is that since Mongrel Glass is made out of glass, rather than the plastic film of most protectors, it’s a little more susceptible to being chipped on the edges if the phone is dropped. It’ll do its job — protecting the screen of your phone — but it’ll sacrifice itself if the phone falls on an edge.

For what it’s worth, we used the Mongrel Glass protector with our Samsung Galaxy S4, and dropped it a few times by accident — including into an edge, where the phone’s chrome edge strip is now dented — and didn’t break or crack the Mongrel Glass. Using a bumper or edge-protecting case is best practice, but we’re reckless, and the Mongrel Glass is as sturdy as we’d expect.

The Mongrel Glass kit is available for the three most popular smartphones available today. With its slightly curved edges we think it’s better suited to the Galaxy S4, but even on the iPhone 5 and HTC One it looks to do an excellent job of protecting the screen from edge to edge. It’s an expensive product compared to a phone-booth film protector, but if you care about your phone and value the clarity of its screen, we think it’s a worthwhile purchase.