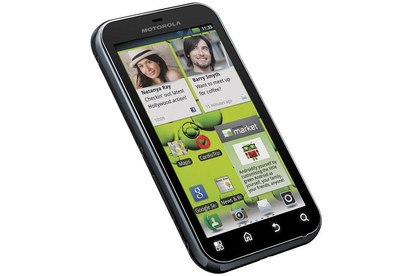 The Motorola Defy+ remains the only option if you want an Android phone that will resist the elements. We love the fact is is water and dust resistant, but Motorola's Motoblur software remains mandatory and the Defy+ isn't as fast or user-friendly as it should be.

In late 2010, Motorola released the world's first rugged Android smartphone, the Motorola Defy. Fast forward almost 12 months later and the company has brought to market the Motorola Defy+ (Plus), an upgraded version of the original Defy. Though its new $299 price point is certainly attractive, we don't feel the Defy+ offers enough improvements over the original.

All you need to know about the design of the Defy+ can be found in the review of the original Defy. That's because the Defy+ is virtually identical to the original model. It has the same 3.7in touchscreen and an identical ruggedised body, though the screws around the sides, the power button, the volume controls, and the slider that opens the rear battery cover are now coloured silver rather than gloss black. The touchscreen is again coated in Gorilla glass and although its clear, the Defy+'s display does lack the vibrancy and brightness of some of its competitors.

Normally we'd be disappointed with an identical look and feel considering the original Defy is nearly a year old. However, the Defy was an original and refreshing design that hasn't aged all that badly, so the Defy+ still manages to stand out amongst newer competitors. This is made easier by the fact there is next to no competition in the ruggedised space. Curved edges make the Defy+ comfortable to hold and use and the phone is also light and easy to pocket.

The original Motorola Defy launched in the Australian summer and was marketed as "Australia's first summer-proof smartphone" so the Defy+ naturally follows suit. The phone isn't completely waterproof but its water resistant up to one metre and is also dust resistant, too. Like the original, you'll need to make sure the plastic flaps covering both the headphone jack and the micro-USB port are closed before you attempt to dip the phone in water; both are a little annoying to open, but effectively seal the ports from leaking water when correctly closed.

Motorola says the Defy+ has a faster processor and upgraded software, which should therefore result in better performance. Though Motorola has made a few nice tweaks to its Motoblur software, we didn't notice a huge increase in performance. We still encountered many times where the phone felt slow and sluggish, and this often occurred during basic tasks such as scrolling through home screens, or opening the camera app.

Motorola's Motoblur software is still mandatory on the Defy+ — as soon as you switch on the phone you're prompted to enter your Motoblur account details or create an account if you don't have an existing one. To be fair, Motoblur does offer some excellent security features such as the ability to automatically wipe the handset when it is lost or stolen. However, its widget-based interface remains cluttered and confusing and there is effectively no way to use the phone without a Motoblur account.

There are a few new features that do make the user experience slightly more positive. You can now sort the app menu by all, recent or downloaded apps (just like you can on the Motorola RAZR) and the three shortcut icons on the home screen dock are customisable. There is also the option to create home screen "profiles" so you could effectively set screens for work, home and weekend: the three default options. Sadly, you can't remove home screens if you don't want to use them — you're stuck with the default seven.

The Motorola Defy+ once again includes Swype text entry with the on-screen keyboard. Swype allows you to slide your fingers over the letters you want to type in a single motion, letting the software work out the word you're trying to write. Though it sounds awkward, Swype is very easy to pick up and surprisingly accurate. As with most on-screen keyboards, the software will learn as you type and add words you use regularly to its database.

The Motorola Defy+ has a few handy applications preloaded including Quickoffice, Media Share (for playing video and music through a DLNA-compatible television). There's also a file manager and a cardio trainer app that will log workout activity using the GPS and a pedometer. The Defy+ has a unique media player — it will automatically find album art and lyrics from the Internet for any tracks in your library, while a "song identification" feature, similar to the app Shazam, is also included.

The Motorola Defy+ has the same a 5-megapixel camera as its predecessor. It has autofocus, a single LED flash, and doubles as a video recorder. We loved the fact you can use the volume keys as zoom buttons, and the ability to swipe through scene and effect settings is a nice touch. However, we really missed a physical camera button and there is no front-facing camera for video calling. The LED flash does nothing for low-light photography either, so photos captured at night are of poor quality. Photos can be stored on the Defy+'s 2GB of internal memory, or the 2GB microSD card that Motorola includes in the Australian sales package.

Motorola has equipped the Defy+ with a bigger battery than its predecessor — 1700mAh compared to 1540mAh. This should theoretically mean a noticeable increase in battery life but we didn't notice a huge improvement. You'll more than likely need to charge the Defy+ every night with regular use, so its no better or worse than the majority of Android phones on the market.

Perhaps the best thing about the Motorola Defy+ is its price: it's available for just $299 outright from Telstra stores. This makes it excellent value for money, especially considering it's the only ruggedised Android phone available on the market.