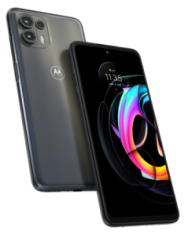 Should you buy the Motorola Edge 20 Fusion?

If you’re looking for a 5G-capable mid-range handset, then the Motorola Edge 20 Fusion is a decent option. Its 108-megapixel rear sensor takes detailed shots up close and a 5000mAh-capacity battery means you can quit rushing to charge your phone every day. What’s more, the handset’s large 6.7-inch OLED display is roomy, and the display’s 90Hz refresh rate keeps the visuals smooth. Motorola’s Edge 20 Fusion also benefits from plenty of software enhancements that make best use of its hardware configuration. This includes a neat app that easily connects your phone with your PC, making file sharing no chore.

The Motorola Edge 20 Fusion sits behind the Edge 20 and top-shelf Edge 20 Pro in the company’s Edge 20 series line-up. These devices are a step up from the entry-level G series, but still highly affordable. All three Edge series models sport useful features, but the Fusion seems to have nabbed (arguably) three of the best: a good rear-facing camera, 5G capability and a large 5000mAh battery capacity.

Yet, at just AU$499 it costs AU$200 less than the Motorola Edge 20 (AU$699), and AU$400 less than the Edge 20 Pro, which seems excellent value. It comes in two colours: Electric Graphite and Cyber Teal. In Australia it’s available from JB Hi-Fi, Officeworks, The Good Guys, Harvey Norman, Big W, MobileCiti and Lenovo Online.

You can also purchase the Motorola Edge 20 Fusion on a postpaid plan at Vodafone (See the widget below).

When it comes to design, the Motorola Edge 20 Fusion sports rounded edges and a slim frame, measuring just 8.2mm thick. These features give it an upmarket appearance, as does its slimline camera box on the rear that houses a tri-camera array.

The Edge 20 Fusion also has an attractive, smooth-to-the-touch finish, that hides fingerprints well. Motorola nailed the Electric Graphite colour (our review unit’s colour), with just the right tone to mute glare from indoor lights, while still showing off the stylish Motorola ‘bat’ logo on the back. However, there are a few giveaways to its mid-range status. The display is flat rather than curved like you’d find in Samsung’s premium handsets. The handset’s build quality also reveals plastic encasing on the back that results in some movement (with pressure).

That said, and to its credit, Motorola includes a silicon protective case in the box, and if you use this in conjunction with a quality gel screen protector, you should be able to avoid any damage from a drop.

The generously sized, 6.7-inch FHD+ (1080 x 2400) HDR10+ display is super responsive thanks to its 90Hz refresh rate. Moving in and out of apps and web pages is a breeze. In this mode the phone does consume more battery power, but thankfully Motorola gives you the option of switching from a 90Hz to 60Hz refresh rate, a sensible idea when not in heavy use.

Motorola’s choice of an OLED over an LED display is a wise one. Motorola says it can display over one billion colours. I found it produced deep blacks, as well as vibrant colour images that looked realistic rather than painted, as is frequently seen in mid-range phones. However, whites do come up a little bluish, even on the highest brightness setting. Another quibble is the positioning of the hole-punch front camera on the phone’s display, which sits about 3 mm down from the top bezel. Some users may prefer a phone with more discrete positioning.

The Motorola Edge 20 Fusion’s 108-megapixel sensor is the same sensor that appeared in the Samsung Galaxy S20 series smartphones. It’s a little old now, but seems right at home in a mid-range phone in 2021, offering an affordable way to add detail and extra light to images.

The way it does this is through a process called pixel binning, in which the data from a number of pixels gets combined into one to create ‘super pixels,’ that can better process light in images. In the case of the 108-megapixel sensor in the Motorola Edge 20 Fusion, the sensor bins 9 pixels into one to produce 12-megapixel images. As you can see from the purple flower image below, this produces detailed pictures with vibrant colour and deep contrast, especially when there’s plenty of light available. This is particularly evident at close range, where the Motorola’s 108-megapixel sensor really comes into its own.

If you’ll be snapping relatively stationary shots, like a gathering at a birthday party, your cat, or the flowers at the local park, the Edge 20 Fusion’s rear-camera will produce some great shots.

However, truth be told, its cameras are a bit slow, and it will struggle to capture crisp action shots. The Edge 20 Fusion’s cameras partly make up for this with a long list of useful software enhancements, including a Tap anywhere to capture function, and a Quick Capture function that allows you to twist your wrist twice to open the rear camera.

If you have a special shot in mind, you can also increase the level of detail in your image by setting the rear-facing camera to High Resolution Mode. This mode does capture significantly more detail, but images measure 12,000 x 9,000-pixels and can be as large as 33MB. This was a neat feature that I used to shoot some very detailed outdoor shots—images that showed better contrast in their darks and shadows than images shot in Default Mode. See the comparison below.

The Motorola Edge 20 Fusion uses Motorola’s My UX Operating System. Thankfully, it’s a near-stock experience to Android 11, with just a few minor differences. For example, Google’s Search Bar is square instead of rounded and Android 11’s app drawer is a little roomier than in My UX, but these differences don’t impact the user experience. Motorola also opted to keep the app selection down to useful Google favourites, so there’s no need to remove excess bloatware.

Motorola’s Moto app is one of the best features of the My UX. Here you’ll find a tonne of personalisations, like wallpapers and font selections that you can apply to give your phone a unique flavour. You can also learn some handy gesture controls that make using your phone easier—like a three-fingered gesture to take screenshots.

A standout feature of the Moto app is Motorola’s ‘Ready For,’ that I used to connect my review phone with my PC to transfer files and control my phone remotely. This feature was super useful for updating my photo library, freeing me from having to perform the multiple steps of uploading and then downloading files via my DropBox.

The Motorola Edge 20 Fusion runs on a MediaTek Dimensity 800U processor, which despite its name, won’t match the processing power of premium chipsets denoted by the number 800, like the Qualcomm Snapdragon 888+.

Nevertheless, it performed very well in our benchmark comparison with another mid-range 5G-capable phone, the Oppo A74 5G, outperforming the Oppo’s Qualcomm Snapdragon 4805G processor in both CPU speed and in compute benchmarks. While its CPU scores were only slightly better than the Oppo’s, the Edge 20 Fusion was head and shoulders ahead of the Oppo in its Open CL and Vulcan benchmark scores. The takeaway? The Motorola Edge 20 Fusion is the better option for gaming, demonstrating lots more power to run graphically demanding games.

The Motorola Edge 20 Fusion had exceptional longevity in my battery testing, remaining powered on for several days with moderate app usage. It lasted from midday on Thursday to Saturday night, more than two full days later. The long battery life can be attributed to the Motorola’s large 5000mAh-battery capacity, which is more than you’ll find in some premium handsets, like the Samsung Galaxy S21 5G, which has a 4000mAh battery. Despite its large battery size, Motorola managed to keep the handset’s weight down to 185g (albeit with that plastic backing). While not exceptionally light, it’s light enough to be no burden in your pocket.

Motorola’s Edge 20 Fusion has a long battery life, 5G capability and a rear-facing camera that can take detailed shots at close range. With a processor that’s very capable of powering graphically demanding games, the Motorola Edge 20 Fusion should be an attractive option for those looking for a mid-range all-round performer.

Motorola’s Edge 20 Fusion has a long battery life, 5G capability, fast processor and a rear-facing camera that can take detailed shots at close range. These factors add up to make it an all-round performer.