The C3 Touch and Type is reminiscent of older Nokia phones, but adds the ability to operate the device through a touchscreen. 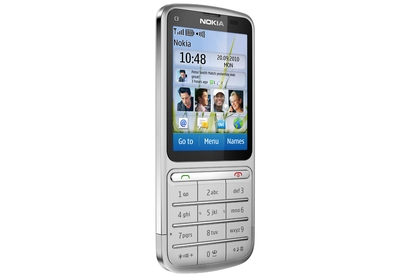 The Nokia C3 Touch and Type smartphone has a design that is intended to appeal to people familiar with non-touchscreen phones but it also offers a touch interface.

The Nokia C3 Touch and Type smartphone has a hybrid design that combines a touchscreen and a traditional 12-button phone keypad.

Like the Nokia X3 Touch and Type, the C3 Touch and Type is reminiscent of older Nokia phones such as the 6700 classic. According to Nokia, the combination of a resistive touchscreen and a traditional keypad gives users "both the familiarity of their trusty older devices and single-handed operation, plus a taste of the modern through the ability to operate the device through a touch interface".

The Nokia C3 Touch and Type will run the Symbian Series 40 operating system and includes 3G and Wi-Fi connectivity along with Bluetooth, but it doesn't have GPS. The handset includes Nokia Messaging 3.0, Nokia's e-mail and instant messaging software that also provides Facebook and Twitter access. The phone will also be able to access Nokia's Ovi Store for third-party applications.

The Nokia C3 Touch and Type has a stainless steel case and will come in silver, warm grey and khaki gold colour variants. It has a 5-megapixel camera with LED flash, and a microSD memory card slot that supports cards of up to 32GB in size.

The Nokia C3 Touch and Type is expected to launch in Australia before the end of the year, but no pricing or carrier details have been announced.