Back to the Future: It's About Time

Back to the Future: It's About Time begins in 1986, when Doc's disappearance from the "present" is starting to have repercussions throughout Hill Valley 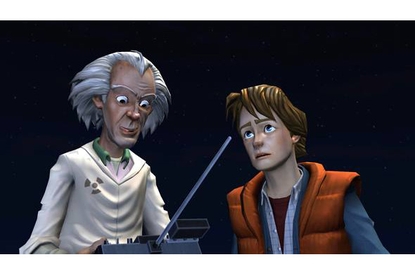 The first chapter of Telltale's new Back to the Future story has been released, changing the film franchise's history of subpar games for the better.

When games like Star Wars: Knights of the Old Republic, GoldenEye 007, and Batman: Arkham Asylum come out to great critical acclaim, I'm almost always hit with a twinge of jealousy. Not at the developers enjoying their well-deserved success, or the publishers raking in profits, but the diehard fans of each series that get an amazing new way to enjoy their favourite franchises. While I enjoy Star Wars, Batman, and the like, one movie series has always been at the top of my list -- Back to the Future. And as I've pointed out earlier, the games inspired by the trilogy over the years have largely been duds. However, if Telltale Games' first chapter of the new Back to the Future episodic series is any indication, I may have reason to put my rage to rest in the very near future.

Video games have always had difficulty telling stories that complement feature films, but thanks to the passage of time and the collaboration of those key to the creation of the original films, the story in Telltale's first Back to the Future episode, It's About Time, gets off to an above-average start. The game begins in 1986, when Doc's disappearance from the "present" is starting to have repercussions throughout Hill Valley. After dealing with said anomalies and chatting up the locals, series protagonist Marty McFly comes across the previously destroyed time-travelling DeLorean in fine shape, but without a driver. After doing some research, he discovers his destination -- a new time period in Hill Valley's storied history. Without spoiling too much for Future-fans, this new era features a previously unseen generation of Hill Valley's famous families for Marty to interact with, as well as a much younger version of one of the trilogy's most beloved characters.

While the plot is almost at the level of the film trilogy, and it's great to interact with characters from the franchise, the one thing that really bothered me about the game was the lack of scale. Considering the amazing set pieces that the first three movies were based in, the fact that the game takes place in roughly one large exterior location with a handful of smaller interior and exterior spots makes the smaller scale pretty apparent. Only one place is investigated in both time periods during the episode (another is viewed from afar), which definitely cuts down on the level of awe that the trilogy inspired. On the same level of downgrading is the courtyard chase scene in this game -- it's a sad replication of the amazing skateboard sequences of the first two movies that should have been excised, in my opinion. A few more minor infractions might annoy Back to the Future fanboys, like the lack of depth to the new characters and a few poorly-explained plot anachronisms. The former may be improved over the course of the series, but the latter is a little incongruous with the usually tightly scripted series.

Despite the few qualms I have about the story, I must say that it's obvious that the team working on this game knows the trilogy backwards and forwards, and it comes through in almost every facet of It's About Time. The cartoony visuals allow for some impressive sequences (the aforementioned chase notwithstanding) while still keeping the ability to display references to the first three movies. Most importantly, the game looks great in HD, and the characters and settings are immediately recognisable.

On the audio front, the two leads are voiced extremely well, with one reprising his role from the movies, and another tackled by one of the best voice-alikes I've ever heard. Meanwhile, the rest of the cast performs amicably to replicate the work of the supporting characters. Thankfully, their 1986 counterparts are only briefly visited, with their ancestors having larger parts where the slight dissonance isn't as noticeable. While the voice acting has to settle for being almost perfect, the replication of the franchise's themes are masterfully done, to the point where you'd think that Alan Silvestri (the composer of the trilogy's tunes) composed the entire score. The ambient music playing throughout the game is done in a way that properly pays tribute to the movies, while also fitting into the settings of the game and style of the genre.

Speaking of the genre, Back to the Future: It's About Time's gameplay is pitch-perfect, and should cater equally to both Telltale's adventure-puzzle fans and trilogy aficionados that aren't as video game-savvy. The controls offer up enough variety to cater to those who know their way around a keyboard and mouse, while also allowing a minimalist style to those who never game on their computers. While you get a greater range of movement by using the arrow keys, I was able to complete entire sections of the game using only my Macbook's trackpad, thanks to the game's secondary "drag and move" control scheme. Some of the puzzles take a bit of thinking to plow through, and hints are on demand if a particular challenge is giving you trouble. As a never-wavering Back to the Future fan and a somewhat lapsed adventure game player (Maniac Mansion and Discworld were my favorites), I'd say the puzzles are the exact right difficulty for Telltale vets and fourth-dimensional-thinking Back to the Future fans alike. My playthrough for the first chapter lasted a bit over three hours, though I thoroughly examined almost every dialogue choice. Players who want to breeze through the story can probably clear it in less than two hours, but given the fun and familiarity of the universe, I doubt many players will want to keep their conversations curt and their explorations short.

As the first of five parts of a US$25 package, it's hard to complain about the small scale of Back to the Future: It's About Time given the amazing job that Telltale has done replicating the audio and visual elements of the trilogy while telling a good story (which has the potential to get even better). Right now I think Telltale's created a very good game, and I have a feeling it's going to have an even greater future.

Error: Please check your email address.
Read more on these topics: games, pc games, Back to the Future
Show Comments