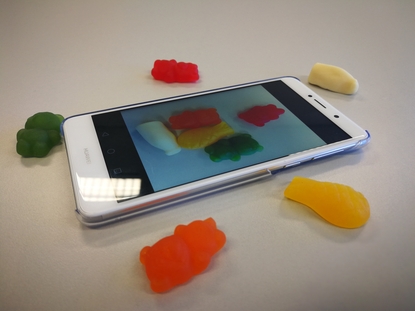 At $400 it's difficult to find fault with the GR5. It can take better pictures than phones which are $700 dearer, it's quite fast and well made. All good.

We’ve raved about Huawei’s ‘Leica' phones’ (P9, Mate 9, P10 and P10 Plus) photography prowess extensively and we even use them for in-house product photography. But despite offering great value they’re also expensive. So we were very interested when Huawei sent us a budget model which costs almost one-third as much as a P10 Plus. This puts it up against the likes of budget marvels like the Moto G5 Plus and Oppo A57. That’s some fierce competition but then the GR5 has some great credentials. So which should you buy?

The GR5 certainly doesn’t look like a budget phone – it’s less than half the price of a Huawei Mate 9 – but it could easily be mistaken for being part of the same mid-range bracket. The 5.5-inch LCD screen is generally colourful, is Full HD and relatively sharp at 403 pixels per inch.

The chassis isn’t oversized and it feels solid if a bit plasticy. That can be a boon considering how fragile the glass-encased top-end phones can be. Huawei doesn’t tell us whether tough Gorilla Glass is used for the screen so it’s safer to assume that it isn’t.

The phone does come with a discreet plastic case, though, and this protects the rear and corners without masking the looks or adding bulk.

The OS is Android 6 which is still adequate but missing neat features like Google Assistant. Huawei’s EMUI software sits atop this but doesn’t interfere much. There’s no app drawer and the basic Home Screen can be converted into a really simple layout if the phone is going to be used by n00bs.

It's powered by a 2.1GHz Kirin chipset with octa-core processor. This really isn’t far behind what we see in top end phones and the result was responsive navigation and fast app opening. It also handled games of all levels with aplomb – Pokemon Go and Angry Birds provided no issues and there weren’t any frames dropped in Need for Speed No limits. That doesn’t mean the phone was never prone to hanging, though. Periodically, we’d have to wait a while for things to happen, but this was usually when hardcore photo processing or downloads were taking place.

There’s a fingerprint reader on the back which was fast and accurate.

The solitary, bottom-mounted speaker lacked any punch but still played audio at a reasonable volume. It was just the right side of tinny. As for speakerphone and video calls, we didn’t have any issues but if you need loud clarity in a noisy room, it will struggle.

The main rear camera is 12-megapixels but it’s joined by a second two-megapixel camera.

This is used to create impressive Bokeh effects – where you simulate an SLR camera’s wide aperture by blurring areas around the subject in order to add impact to photos. On the more-expensive siblings, the second camera adds extra light information and an amazing monochrome sensor. But this one is all about focus effects. And it works.

All close-up subjects – people, objects… cats – all can look fantastic using the GR5’s camera – dramtically more so than anything else near its price.

There aren’t quite as many settings as with the siblings but it was still capable of producing sharp, well-focused, colourful pictures. The colours didn’t quite have the punch or impact that we’ve seen on top-end models, but for the money, it's very good.

Interestingly, while the sibling cameras have struggled badly in low light (when not using monochrome) the GR5 performed rather well. In dark and low-light scenes photos were frequently usable. However, this could require some patience as everything needed to be still for good low-light shots.

The eight-megapixel Selfie camera was generally good and clear. But portraits taken from the rear camera were so much better that we’d prefer to take blind shots and hope we were lined up correctly.

Landscapes were generally well exposed but demonstrated that detail could be lost in dark areas due to a slightly-limited dynamic range.

Video could be captured at Full HD 30fps and we were really quite impressed. While image stabilisation wasn’t great and dynamic range issues meant that light areas were favoured quite heavily over dark when it came to retaining detail, we were left with very usable footage.

Audio stayed just the right side of robotic when indoors and big changes in focus needed a bit of a manual nudge from time to time, but the detail on offer and the impressive low-light performance here meant that the video camera offered better all-round footage than many expensive models.