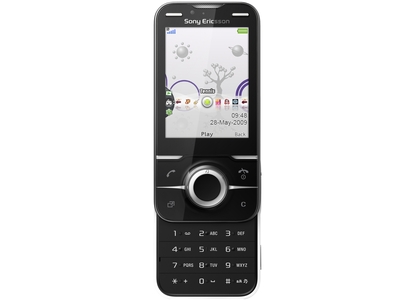 Sony Ericsson's Yari mobile phone promises a lot but fails to deliver anything new, aside from gesture gaming. While this is a noteworthy feature, we really can't see mobile games taking off on such a small screen. What you're left with is a basic slider phone with a pretty good camera -- but we've seen it all too often before.

Sony Ericsson's Yari looks much like another run of the mill, mid-range slider mobile phone of the kind we've seen over and over again from the company. Turn it on, though, and the Yari is full of surprises, most notably its "gesture gaming" function and the good 5-megapixel camera.

The Sony Ericsson Yari has a large, round five-way navigational pad, along with large answer and end call keys and dedicated buttons for shortcut and clear. Two thin selection buttons sit just below the display, and they're easy to miss. There are two further selection buttons on top of the display that are used for various built-in games.

The phone looks and feels very plasticky. It doesn’t seem like the sturdiest handset we've reviewed, either, with the slider rattling slightly when open. The Yari's keypad is soft and rubber-like, and the keys are well spaced. Unfortunately, they feel spongy and require a firm press to activate; this quickly becomes frustrating, especially when text messaging.

The most intriguing feature of the Sony Ericsson Yari is "gesture gaming". Employing a front-mounted VGA camera, the Yari's gesture games react to your hand and arm movements, allowing you to swing your hand to hit a tennis ball, or throw your hand forward to roll a bowling ball. Think of it as a Nintendo Wii, but on a much smaller scale. The games are very basic (most of them have average graphics) and the small screen really isn’t ideal for this style of gaming. The Yari does a reasonable job replicating your hand and arm movements but the main issue is that most of the installed games require the phone to sit upright — Sony Ericsson does include a plastic stand in the sales package, but this needs to be carried around separately and isn’t attached to the handset.

There are also only two gesture games installed on the Yari: Bowling and Tennis. Conveniently, the Yari has a games carousel that can sit on the home screen and run in the background, allowing quick and easy access to all your installed games.

Games aside, the Sony Ericsson Yari mobile phone remains fairly standard fare, with a 5-megapixel camera the main highlight. We were impressed with the images the Yari was able to snap, especially in good light. The camera includes autofocus and a single LED flash along with some more advanced features like an image stabiliser, smile detection and face detection. There is no BestPic function, however. The flash is reasonable for a mobile phone, but it isn't powerful enough to produce good quality photos in dim lighting.

The Sony Ericsson Yari mobile phone possesses an excellent media menu. It looks and feels familiar, employing the same tiered interface as Sony Ericsson's Walkman range. A new feature is the ability to select themes that change the look of the audio player. There are a number of themes preinstalled, including a turntable, a DJ deck, a cassette player and futuristic-looking radio. Unfortunately, the Yari's multimedia capabilities are let down by the lack of a 3.5mm headphone jack and there isn't even an adapter included to use regular headphones. Only 60MB of memory is available on the Yari but a microSD card slot is located on the right side. The Yari is one of the first Sony Ericsson handsets to use the more popular microSD card instead of the proprietary Sony Memory Stick Micro (M2) format.

The Sony Ericsson Yari has a built-in GPS receiver and comes preloaded with Google Maps and Wayfinder Navigator software. The latter provides full turn-by-turn navigation but has an extra subscription cost. Wi-Fi isn't available but the Yari has Bluetooth and USB and HSDPA connectivity.

Sony Ericsson has stuck to its familiar proprietary interface on the Yari mobile phone. It's one of the fastest interfaces we've seen from the company in recent times. However, unlike the increasingly popular customisable smartphones currently on the market, the Yari lacks an app store and the ability to tweak the interface aside from the preinstalled themes.