Has Dell gone bonkers or is the Venue 8 a reimagining of the popular slate? 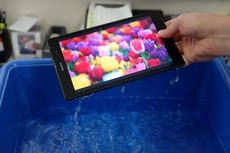 Leaving Galaxys in its rear view.

All things a smartphone should be and nothing more Finally, a flagship from the third largest smartphone company in the world

In pictures: Hands on with Sony's Xperia Z2 Tablet

Sony's latest tablet has the competition against the ropes. It is faster, lighter, tougher and prettier than most. But that doesn't make it perfect.

HTC's latest flagship will go on sale before Samsung's Galaxy S5, and the One (M8) will cost you less if you buy it from Optus or Vodafone. Does this make the One (M8) the bargain of the year?